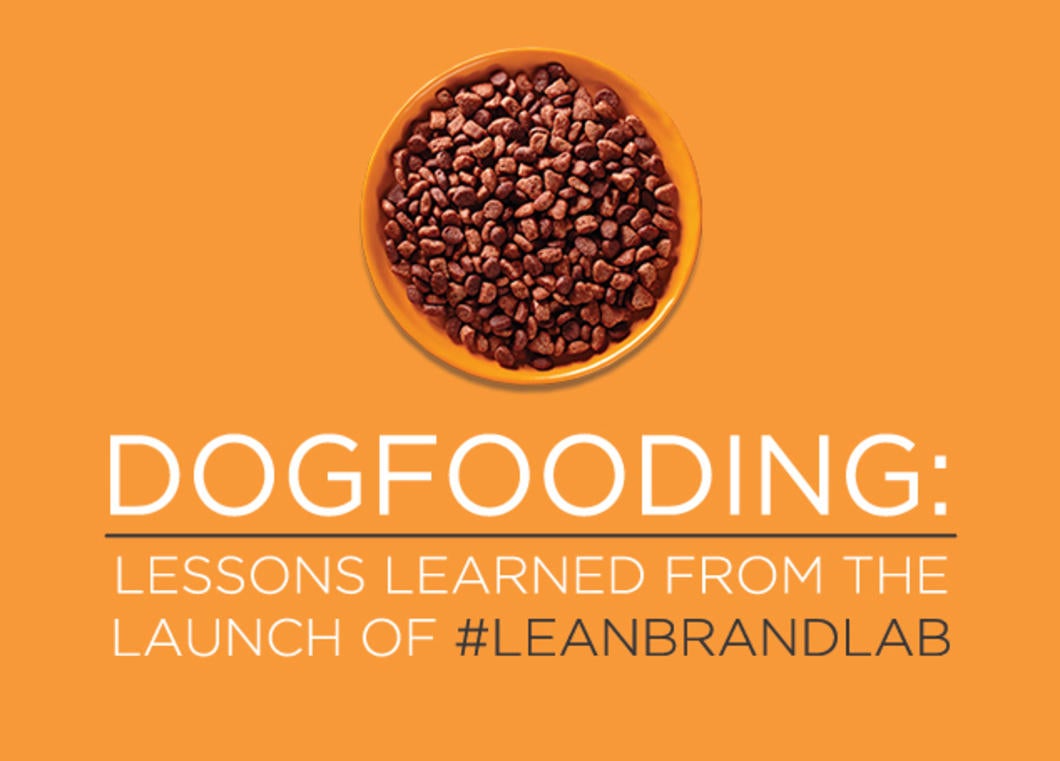 I’ve become more and more acquainted with the phrase, “eating your own dogfood,” the farther I journey down the Lean Brand innovation path.

My personal acquaintance with the phrase has been using the Lean Brand Innovation techniques that I’ve written, taught and championed for the last few years in the validation of products I create to serve the founders, intrapreneurs, and entrepreneurs I get to work with every day.

My most recent foray into dogfooding was with the launch of the #LeanBrandLab.

One of the most rewarding pieces of being a part of the Lean Brand community is getting the chance to listen, observe, and learn from the startups that have decided to journey with us. I’ve heard from so many of them about what they needed to be more successful in building relationships with their audiences. The three that I continually hear most are:

Out of listening to and understanding these needs deeply, I knew startups needed something to stand in the gap between reading the book and trying to apply the principles alone and hiring a private consultant. I assembled a team, started hypothesizing about what we should create, and started working to validate the type of product that was needed.

As a result, the #LeanBrandLab was born.

We believed that the Lab had to be a space where exploration, experimentation, failure, success, and learning could all happen in a safe environment. I also knew I needed to be able to be hands on with each and every startup that attended LAB. I was confident two-days of intention around lean brand innovation would create immense value for the founders we set out to help.

Our hypothesis was something like this: if we create a two-day accelerator around the VALUE of brand innovation, then startups would be willing to invest their time, resources and energy to attend.

The metric for success: when 12 startups committed to being a part of the first #LeanBrandLab.

We tested a few landing pages, wrestled with how best to present the LAB and started to reach out to core early adopters for their support.

We launched and started watching the applications roll in. Application after application continued to be submitted day after day. It felt good and felt like validation of the hypothesis we had set out to test.

Admittedly, what had started as a simple experiment, had, in light of what I had mistakenly read as success, mentally turned from an experiment into a full blown, validated product.

The Pit of False Validation

After 24 days, applications had closed. We evaluated each startup, wrestled with who to invite and finally made an announcement about who we had accepted to LAB.

I set-up 30 minute calls with every founder that was accepted into LAB and sent out emails with all of the relevant details (including price). The feedback was telling:

“I love what LAB is all about, and clearly see the value, but I don’t think we can afford it right now.”

“We are unable to afford attending LAB at this time. We need it. We want to look at this again in the future. Your pricing is reasonable. If anything, you are underpriced. You just caught us at a time when we must allocate our limited financial resources on other items.”

We even had one applicant literally say, “I'm sorry to say I wouldn't consider attending your event for anything less than having all-expenses paid including the cost of your event, plane flight & a hotel. In exchange I'd allow you to use us as a success story/testimonial you can use to promote your company.”

Instead of cleanly proving our initial hypothesis, one way or the other, what we thought was full validation was false validation: validating the idea of the product; not the product, the market and the price.

Although false validation feels good, it is probably the most dangerous feedback you can get.

Looking back, one of the biggest debates we had about launch was around price. Not what to charge, but how and when to include pricing in the conversation.

We had made the decision to leave it off of the landing page and, instead, introduce the conversation once we had received an application. We weren’t hiding, trying to be sneaky or scared to charge for LAB. We simply felt the best way to have the conversation about price wasn’t on a static landing page.

What that decision led to was a ton of applications, but only 6 confirmed “Yesses” and one fully-paid startup. An agonizing 2% return.

Results: Learning or Not Learning...That’s it.

In any lean innovation experiment, only three things can go wrong: 1) You built the wrong thing; 2) You talked to the wrong audience; or 3) You measured incorrectly.

With our initial attempt at #LeanBrandLab we had nailed #1 and weren’t off on #3, but whiffed at #2.

All of the feedback validated we had built the right thing. The product, a two-day brand innovation LAB, was right in line with solving a problem many startups face: eliminating the waste in branding and learning how to innovate with their audience. We had validated the product.

Our metric wasn’t off either. 12 committed startups would have proved to be around 24% of the applications we received. Right on target.

But where we had failed was in our audience. The audience we had reached couldn't afford the product we were offering. This was most likely compounded because when a founder filled out an application, they weren't able to self-select out based on price.

From a launch perspective, we had failed.

But remember the whole “eating your own dogfood” thing? To quote myself in The Lean Brand, “There’s either learning or not learning...that’s it.”

We had failed and we had learned.

To be honest, failure and learning hurt. It doesn’t feel great to set out and fail. But in that failure, there’s an opportunity to learn, to reload, and to relaunch.

And that’s exactly what we’re working on today. We’ve corrected the pricing conversation on our landing page. We’ve re-hypothesized about who we need to talk to and have started building those relationships. And we’ve re-adjusted the way we are approaching this next experiment to attempt to nail the right audience.

Although eating your own dogfood sucks at the time; it’s the only way you can evolve to create greater value.